The Strawbridge-Shepherd House is situated on the southern edge of the University of Illinois -Springfield. Originally built in 1845, the house was listed on the National Park Service  National Register of Historic Places in 2015.

This first picture shows the original 1840’s Greek Revival building. A Queen Anne styled addition was added to the rear of the house around 1865. More about the house HERE …

This next photo shows a couple tents of the 114th Regiment Illinois Volunteer Infantry as viewed from inside the house during Old Settler Days on the grounds of the Strawbridge-Shepherd House.

I need to point out that the only soldier without stripes on his sleeves is visible to the right. I am usually very well supervised!! (…and closely watched!)

Thursday Doors is a weekly feature allowing door lovers to come together to admire and share their favorite door photos from around the world. Visit Norm 2.0 for more doors and details.

It has been described as:

All that … what more can I say? Oh, yeah ~ I introduced The Mrs to Lapsang Souchong way back in 2004 and it has been our collective Favorite Tea ever since. Now for the sad part of the story.  A couple years ago the flavor intensity of the available LS in our area diminished most dishearteningly (dang that would be a good Boggle word!). We tried some from a nice little tea shop in Champaign, IL, home of the University of Illinois. No go. We tried importing it from England. Nope, still too mild. We bought Stateside via Amazon.  Same thing, no smokey flavor to encircle the palate.

And now the Happy Part of the story!  Just yesterday (Nov. 22nd), the blogger sustainabilitea,  published a post, and in it she mentioned that she worked part-time at a tea shop, SereneTeaz, and gave a link to it. I, of course, clicked the link to check it out, and they sell Lapsang Souchong tea!  I emailed the tea shop and inquired about the intensity of their LS. I had a reply within an hour, and based on that reply, I placed an order right away.

Here is what hooked me, “It’s very strong, you can actually use it as a marinade if you wanted to cook with it. If you’re looking for a touch of smoke try Russian Caravan. Our lapsang  is very smokey. It stays with you after drinking it. Hope this helps.”

Happier part ~ The LS tea parcel arrived via FedEx THIS MORNING!! As a disclaimer, I will confess that both SereneTeaz and I are located in Illinois, but STILL!!!!!!

Happiest part ~ I opened that parcel of LS tea and took a good loong whiff, then insisted The Mrs do the same. Joint verdict…. good strong fragrance! I proceeded to make a cup for myself to try out the flavor, but none for The Mrs cuz she is caffeine sensitive and does not drink anything with caffeine after 11 or so in the morning.  (Not an issue for me…Caffeine+ is my blood type…) I took a sip after 4 minutes of brewing and insisted The Mrs try it as well. OH YEAH! This is the Lapsang Souchong we have been missing! Thanks Janet and Serene Teaz!!!

Only 2 regrets about this picture: First, my camera phone is not that great so pic is a bit fuzzy. Second, I wish I had a SMELL-aphone so you could enjoy the incredible fragrance of this tea!!!

Because of all the very very busy activities in my life the past couple months, many of my Summer Chores are now transmogrifying into Autumn Chores. Unfortunately, my ACs are now at the front of the queue…

So this weekend, The Mrs & I lowered the mast on the “Miss Mollie” (The Mrs serving as the Winch Wench and yers trooly as the Mast Muscler), removed mast/boom, and then with the assistance of my Mother-In-Law, putted over to the sailboat ramp and removed the boat from the water. 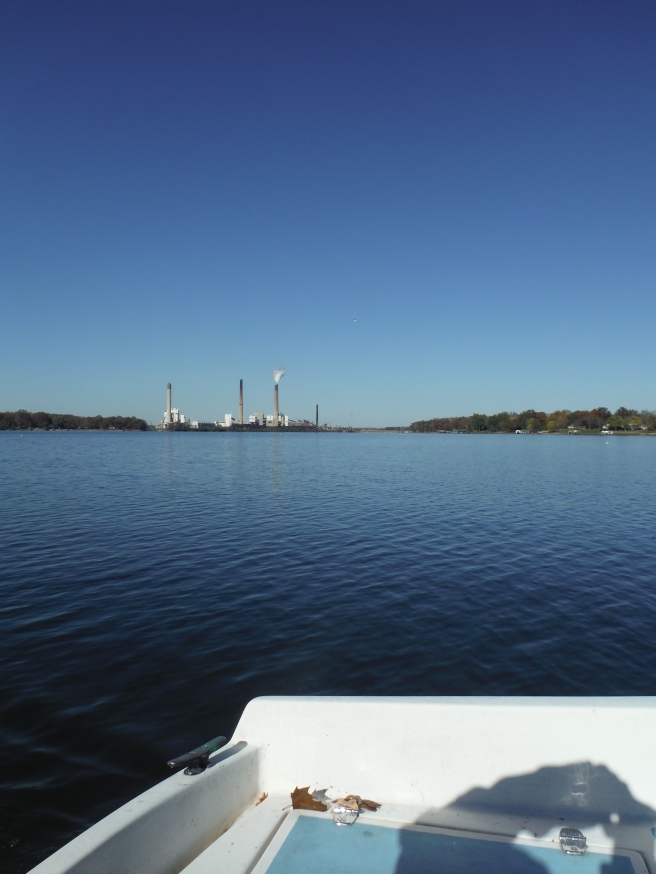 View of CWLP Power Plant as we left the dock, and the historic Last Boat Ride of the year.

The Mrs & MIL waiting for me to back the boat trailer into water to conclude the Boat Removal Ceremony… No one fell in, no one got wet, and we got the boat on the trailer with minimal hassle!!! WooHoo.

The last task involving the Autumn boat chore was to Power Wash all the lake schmutz that accumulated on the hull throughout the summer. I accomplished this yesterday…

Not sure what Chores are awaiting me today, but I am certain it will be fun, fun, fun….  oh yeah? 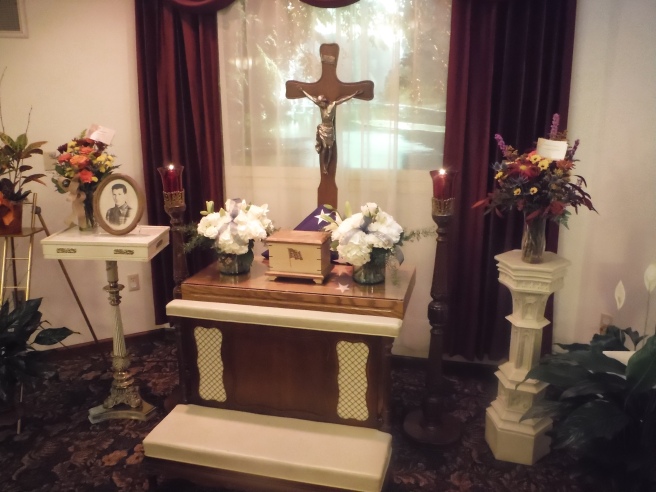 Dad’s funeral visitation/services/mass culminated with his graveside ceremony at the Rock Island Arsenal and National Cemetery . He is now buried next to Mom, and as both are Military Vets, they each have their own grave marker. Due to security procedures, we were not able to visit Mom’s grave. The Army needs advance notice of our visit, and we have to provide authorized ID (ie. Passport…). We’ll go back for a visit after Dad’s marker is set.

Rest In Peace, Dad and Mom. And thank you for your service!

The Mrs posted a nice blog posting at her site this morning about our last day on Mackinaw Island (in September). I am giving you the link to it so you can check it out. There is nothing more I can say!

Last Thursday, November 3, 2016, my father, Nick G. Hughes, passed away suddenly following a brief illness. Hospital attendants were wheeling him along a hallway to take him for an MRI, or maybe a CAT-scan shortly after 7:00 pm when he quietly left this life. I drove to Sterling the next morning and my two youngest sisters and I began the funeral preparations…

Nick volunteered for the United States Army during the Korean Conflict. He was attending pharmacy school at the University of Illinois Medical School in Chicago when the war started, and after he graduated and earned his pharmacy license, he entered service and was assigned to an Engineer Unit. After his Engineer Training was completed at Fort Leonard Wood, Missouri, his unit was sent to the Washington, D.C. area to await orders. And Dad got bored. So he volunteered to work in the Pentagon Pharmacy until he shipped out in order to get away from moving and painting rocks, and whatever other really important tasks are assigned to soldiers who have to hurry up and wait… and he (SP3) went to a dance/social gathering and met a WAC who ran a typing pool: Sgt. Nancee Hauser. And they fell in love. And left the Army. And got married. And had 5 children and 4 grand-children. And Nancee passed away after a long illness 4 years ago. And Dad missed her so terribly. And he told my two youngest sisters that when he died he wanted to be dressed in his best suit, tie, and dress shoes so he looked his grandest when he met up with Mom again. And they got the suit ready to take to the funeral home, and bought him a new shirt and socks. His shoes and belt were a bit dulled, so when I got to Sterling I offered to spit-shine them because: 1) he loved a good spit-shine polish from his days in the Army; 2) he taught me to appreciate and how to spit-shine when I was just a sprout; 3) the State Police academy gave me lots of opportunity to perfect my spit-shine abilities so it is now an easy task; 4) it gave me a strong connection to both my parents at this time of grief and hollowness.  So here is the spit-shining halfway through from yesterday morning. I took the shoes & belt to the funeral home shortly afterwards and then sat with Dad alone for about half an hour saying my final goodbyes… 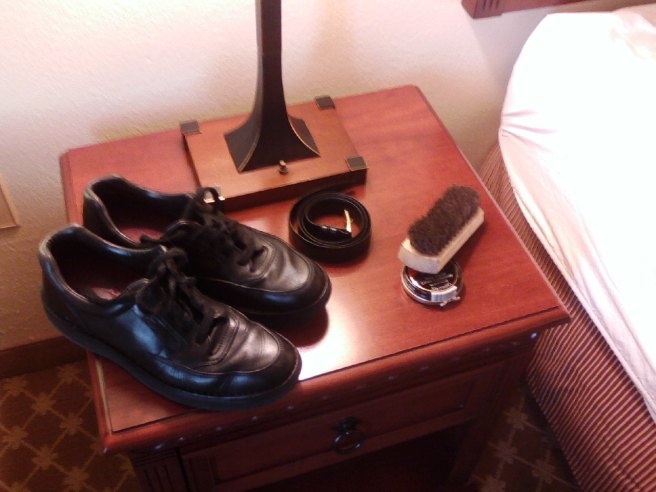 Did I mention that Mom was a HUGE die-hard Cubbies fan who would quote stats about all the players and games and opposing teams and upcoming prospects….?! So Dad got to deliver the message of the Cubs World Series win to her personally!!

This door was a serendipitous find during a 2007 bicycle trip The Mrs & I took from Passau, Germany to Vienna, Austria. We were on a side street in Linz, Austria and rode past this door. I took this photo because it was just so danged interesting, both architecturally, and artistically.

The sign above the door reads “Heinrich Gleissner Haus”. I tried to research Heinrich Gleissner, but every mention about him was written in German, and my last German class was in college back in 1977… But what I was able to translate is that Dr. Heinrich Gleissner was Governor (Landeshauptmann) of Upper Austria province.

Thursday Doors is a weekly feature allowing door lovers to come together to admire and share their favorite door photos from around the world. Visit Norm 2.0 for more doors and details!!!

In June of 1975, “outlaw” country music singer, David Allan Coe, released what was to be his first Top Ten Country Hit. “You Never Even Called Me by My Name“ is the PERFECT country song!!! Because…. it includes the following essential country song ingredients –  mama, or trains, or trucks, or prison, or getting drunk. The last verse goes like this:

So…as a  17-year-old aspiring musician, I had to admit to myself that I had to find another career since I could never improve on this song {sigh}.

So, 42 years later I am a novice blogger. And just this morning I read a blog posting by someone I follow, Dan Antion. And dang-nabit!!! This has got to be the PERFECT blog posting! Read it and weep! (I did/am).

Dan has included animals (dog, cat, black squirrels), bugs (bumblebee), seasonal photos (autumn leaves), travel related pic (airport self-moving sidewalk), and something to make a retired cop’s day, a photo of Dunkin’ Donuts!!! Also, shopping, sports, chocolate, and a $2-off coupon.  I guess it is time for me to stop blogging and find something ELSE to help me waste time…