It is ALL Tanja’s fault. Tanja blogs about her travels @ “the Red Phone Box Travels” .   In one of her posts, she asked if anyone would be interested in doing a Post Card Exchange. Like with REAL post cards. That require handwriting on and actually putting a real postage stamp on, and actually either putting them in a post box or dropping them off at a Post Office. I said I was interested immediately… I mean, how cool is that?  When I was a boy (as opposed to a chicken? or a goat? Oh wait, I would have been just a kid then….) Any way, as I was saying, when I was just a wee lad in grade school, I had a pen pal in South Korea. Then when I was in high school, I had a couple pen pals in Germany and Austria who I would write back and forth to in German, and they would write to me in English. So we could improve our foreign language skills. I loved having pen pals!

I digressed…. So, I now have 4 Post Card Pals. 1 in the USA, 1 in Croatia, 1 in the UK, and 1 in New Zealand!!! And today I wrote them all my first post card, and headed out to the post office to purchase the appropriate postage and SEND THEM AROUND THE WORLD!!! 3 of my 4 required International postage of only $1.20. And it requires a SPECIAL stamp. and the SPECIAL stamp is…. like, WOW…. ROUND! A round stamp! I have never seen a round stamp! How can they even MAKE a round stamp? (okay, just kidding about that…) I commented to the Postal Dude, Dennis, about the uniqueness of the round stamp. He said, as far as he was aware, this was the first round US postage stamp… wow… 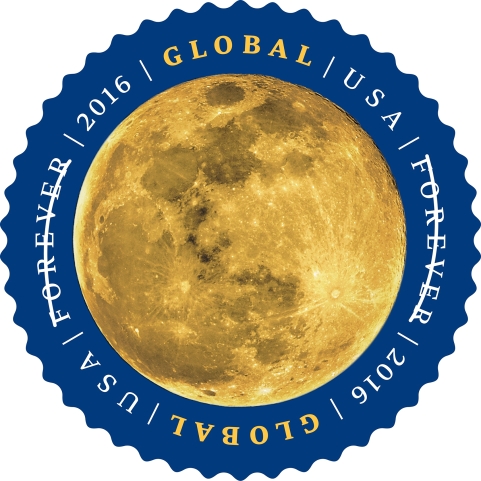 OOOPS… Tanja, SPOILERS! I had wanted the round stamp to be as much a surprise for you as me…. Na schön.

So, what it comes down to, is if Tanja hadn’t started her Post Card Exchange, and if I hadn’t been so excited about it, and if I hadn’t followed through with my post card sending today, I probably would have never ever seen a round US postage stamp in my entire life. Glorious Serendipity!!!

THE BACKGROUND:  The Mrs & I were driving home yesterday afternoon after a 2 hour meeting, and she pointed out a NEW Coffee Shop on Toronto Road that we hadn’t seen before (Free Press Coffee House). I slowed down immediately and turned into the parking lot. We went inside (da-da-da-daaaaa! ominous music plays…). The Mrs ordered a Turmeric Tea & I ordered a cup of their house java brew and a scone to share (da-da-DAAAH! more ominous music….). We sat at a big high-top lazy-susan table, equipped with a Trivial Pursuit game for customers to play. We started reading the cards to each other and, and, and it was then and there I discovered I am a Librocubicularist! The Mrs admitted to dabbling at being one, but I am truly one… “hi kevin!”  And it has only gotten worse since I got an iPad for Christmas 3 months ago.

Oh, seems I forgot to tell you just what this compulsion is!

Oh, and all those names are authors whose works I have read & enjoyed while in bed btw!!!!

I just checked the weather forecast for tomorrow…. Sunny & 70 degrees (Fahrenheit, which is  21 degrees Celsius in case my readers in Wales wondered…). This is not the best news for me because…

Well, cuz shortly after New Years I laid out some of my plans for this year (not resolutions, I don’t do resolutions. I also don’t do social media.) One thing I mentioned I intend to do this year is to edit, revise, update, and publish my thesis on the Origins of the Illinois State Highway Patrol. I posted an excerpt from it already, and that started the process. Today, I spent the majority of the day researching a couple of the first officers who were hired in 1922. And I was having a super fun time! I guess that makes me geek-eligible, right? Well, therein lies my consternation over the nice day tomorrow…

I was hoping to spend a good portion of the day tomorrow continuing my research. But now it looks like I will be outside playing instead. Darn it.

I do have one observation I wanted to share. Based on my research today, I was able to compile a huge treasure trove of relevant information, and save it on my laptop with the relevant citation documentation incredibly fast and easily. When I was researching originally for my thesis, I had to hand write my notes and cites, and roll through miles of microfilm, and travel throughout the state to various museums, archives, and libraries to access possible records. I am (happily) overwhelmed and overjoyed by the ready access to materials online! Ahhh, technology!

On a somewhat related note, today’s researching brought me to the Memorial page online of one of my close friends who died in the line of duty 27 years ago, Trooper April Rapp Styburski … I was on my day off the night it happened. The District desk officer called me to tell me… It still brings a tear to my eye. She is buried in Oswego, Illinois. {I helped my friends, Garrick & Janice, move some of Janice’s son’s furniture and clothes to North Aurora on Saturday, and we went through Oswego. This got me to thinking about April}. End of Watch, January 5, 1990. 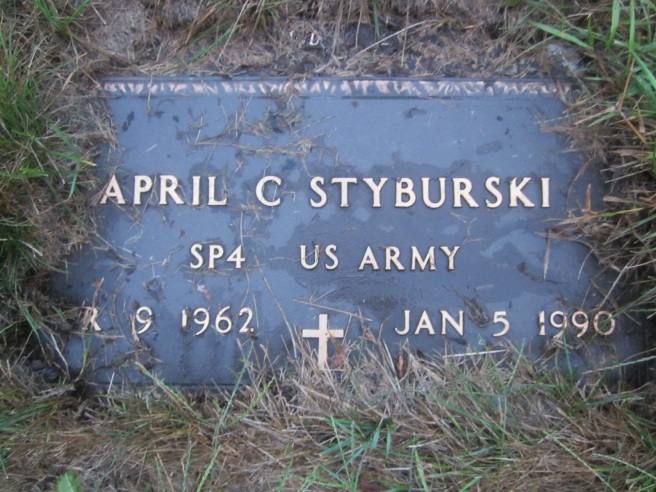 The following is a short excerpt from my History Master’s Thesis at the University of Illinois – Springfield. An original copy of this work resides in the UIS Archives, the U.S. National Archives, and in the archives of the Illinois State Police Heritage Foundation and Museum. If you would like to read more, let me know, and I’ll post more next Sunday… 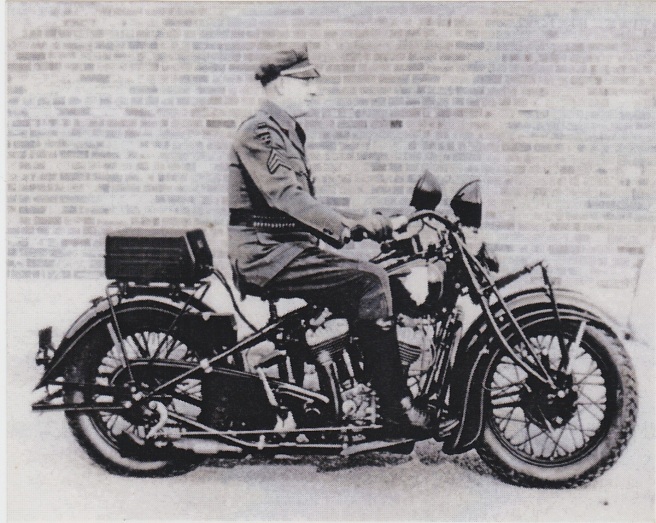 The Origin of the Illinois State Highway Patrol

It had been raining hard for three days, and the dark, slowly churning clouds held no promise of relief.  Governor-hopeful Lennington Small sat in the back seat of his son Leslie’s 1919 Paige Touring Car, Illinois license number “8251”.  Len was a handsome, stocky man of 44, with balding head and bushy moustache.  He watched the rain collect into rivulets on the side window.  He could easily have been thinking to himself, “This trip should have taken me two-and-a-half hours at best!  Now I’ve been trying to get to Kankakee for almost a full day.”

How relevant seemed the haunting words of the journalist J.C. Burton, “… is the supposition correct that there are no highways winding through the fertile fields on which a speed of 20 miles an hour can be maintained without pounding a motor car to pieces and inviting Trouble to jump from Pandora’s box to the bonnet of the machine?”[1]

Candidate Small was headed home to Kankakee following a campaign tour by rail and airplane of Illinois. The Small campaign had shifted into high gear on October 18, 1920, the day in which presidential-hopeful Ohio Senator Warren G. Harding’s campaign train made its first Illinois stop at Kankakee’s Illinois Central Railroad depot.  An enthusiastic crowd greeted Harding, and he assured the assembled crowd “…that he and Len Small would carry Illinois.”[2]  Harding was voicing the campaign slogan, “Return to Normalcy.”  Small was promising to “pull Illinois out of the mud” by building hard (paved) roads throughout the state.

In 1920, Illinois was readily traversed in all directions by railway.  It was a reliable method of travel, although not particularly fast.  For example, in the early 1900s, three eastbound and three westbound trains stopped daily in Oregon, Illinois (100 miles west of Chicago) on the route from Chicago to Minneapolis, plus there was twice-daily service northwest to Galena. “It took from one-and-a-half to three hours to get 22 miles from Oregon to neighboring Rockford by rail, four-and-a-half hours to return on the 5:15 p.m. train… to get 16 miles from Oregon to neighboring Dixon took an hour-and-a-half by rail…”[3]  The Rockford to Oregon trip via horse and buggy, by comparison, took only four hours.  Illinois in 1915 had 12,157 miles of steam railway, and 3,760 miles of electric railway.  Yet by 1918, Illinois only had 427.77 miles of paved roadway.[4]  The main advantage of rail was that trains could run year-round, whereas the dirt roads of the day were impassable much of the year. In spring or fall they were merely mud-bogs and in winter were mostly deep frozen ruts sunk into the rural landscape.

©Kevin E. Hughes  and http://www.msgt3227blog.wordpress.com, 1998 – 2017. Unauthorized use and/or duplication of this material without express and written permission from this site’s author and/or owner is strictly prohibited. Excerpts and links may be used, provided that full and clear credit is given to Kevin E. Hughes and msgt3227blog.wordpress.com with appropriate and specific direction to the original content.

Note: I have decided that publishing the entirety of my thesis would exhaust/fill my storage capacity on my blog, so I have opened a dedicated site just for this history. It is located at:  https://illinoishighwaypatrol.wordpress.com/.

I am just now trying to catch up on all the New Year’s Day postings by all the bloggers I follow. I spent yesterday, New Year’s Day, outside most of the day, so I spent very little time with either the computer or the iPad… It was a sunny and brisk day (in the 40’s), with little wind blowing, so no wind chill to notice.

So a theme from a number of people is Resolutions. I seem to remember making my last NY resolution sometime in the last century. I resolved to never make another resolution ever again. Have pretty much stuck with that one too. Too laid-back otherwise, I guess. Instead, I have mentally made a list of Goals for this year.

Travel and camp and hike more. The Mrs is already planning this for us, so I guess I am cheating… But she is such a great travel planner/organizer! I only get in the way. So, she mentioned Florida, I added, “what about Gulf Shores and then New Orleans?” Goal being objectified and progressing towards execution…. And this also includes planning an overseas trip to explore more of the UK, maybe EU. We already have our train reservations to/from New York, so the framework of the trip is established. Next is our transatlantic ship bookings (I hate flying commercially! HATE it!!!). And then we just have to fill in the little tiny eensy-weensy details from there. You know, who, what, where, when, how. And HOW MUCH??? My one demand for the trip is to visit Charles and Anne at Veddw…the rest, I defer to The Mrs.

Writing. A great number of the bloggers I follow participate in unique Challenges online. I find them interesting, but have not felt compelled to join in (except for Norm’s Thursday Doors – but this is about photos of doors, not a writing challenge). I am setting my own challenge in response therefore. My writing goal is to edit my own historical writings from the past and publish them on line, specifically my senior thesis (about Fr. Samuel Mazzuchelli, OP), and my Master’s Thesis (about the Origins of the Illinois State Police.) I also have some of my (non-history themed) creative writings I kept from my writing classes that I would like to revisit and post…

PostScript. “Keep up…”, the title of this posting comes from (drum roll)… The Mrs! The very first time I EVER saw The (future) Mrs, was at one of her one-woman comedy shows back in 2004. She was talking about how she’ll start talking about one thing, then zoom off in another direction with another thought and so on, and it is important to KEEP UP and not get that glazed and confused look on your face that (some) men get when she is talking to them (Not ME, right dear?).